The White Ops Satori Threat Intelligence & Research team has been actively defending against an ad fraud botnet—which we’ve codenamed TERRACOTTA—since late last year. Today we are revealing the technical details of the malware campaign in an effort to broaden awareness. As we stated in our blog post, in a single week in June 2020, the operation generated more than two billion fraudulent bid requests, infected upwards of 65,000 unwitting devices, and spoofed more than 5,000 apps.

A spokesperson from Google stated, “Due to our collaboration with White Ops investigating the TERRACOTTA ad fraud operation, their critical findings helped us connect the case to a previously found set of mobile apps and to identify additional bad apps. This allowed us to move quickly to protect users, advertisers and the broader ecosystem – when we determine policy violations, we take action.”

The TERRACOTTA malware offered Android users free goods in exchange for downloading the app—including shoes, coupons, and concert tickets—which users never received. Once the app was installed and the malware activated, the malware used the device to generate non-human advertising impressions purporting to be ads shown in legitimate Android apps. This technical report goes into detail on the TERRACOTTA malware, covering the initial application code, subsequent payload activation via its Command and Control (C2) server, and the mechanism through which the advertising fraud was executed.

The initial download for TERRACOTTA apps is straightforward. The main application code (i.e. the APK) is written using the React Native cross-platform development framework and just renders a form that the user fills in to receive their ‘free’ goods. This initial part of the app contains no malicious functionality. However, the underlying maliciousness of the app is already hinted at in its permissions (which need to be specified in the APK at compile time): they include permission.WAKE_LOCK and permission.FOREGROUND_SERVICE, permissions the Satori team typically observes in ad fraud malware that runs continuously on a user device.

Another eyebrow-raising snippet of code further consolidates the assumption that the app is more than meets the eye. Most of the strings inside the app are obfuscated behind an algorithm specifically intended to thwart malware analysis. At run-time when a string is decoded, the algorithm analyzes its own call stack and is designed to fail when it identifies a modified stack - which is what happens when an analyst tries to hook the decryption routine (see below). 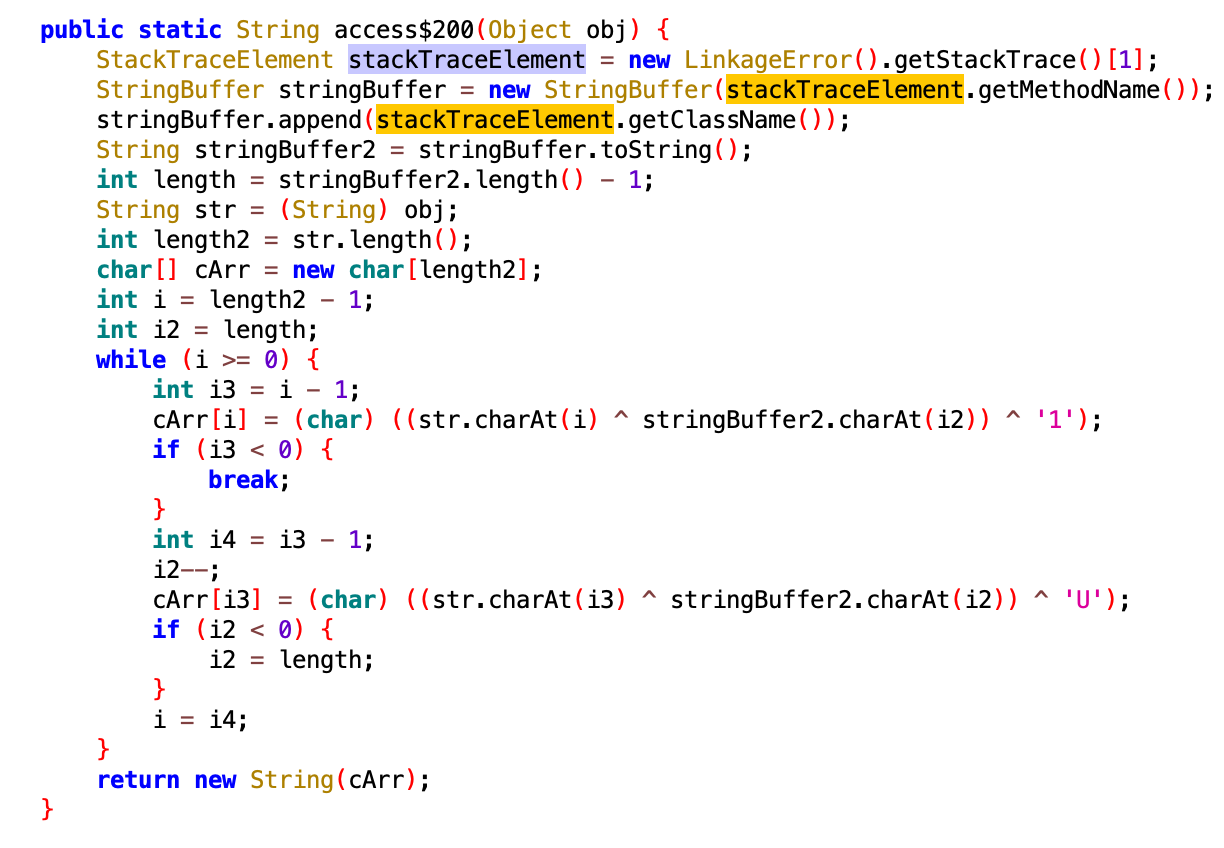 (click on any image in this report to enlarge)
Figure 1. Deobfuscation routine used for one of the strings inside the initial APK. The algorithm uses an element in its own stacktrace as a pseudo-decryption-key, meaning that when the function is hooked, the stack trace changes and the resulting output of the deobfuscation routine is incorrect.
Source: White Ops Satori Threat Intelligence & Research Team

The relevant TERRACOTTA code and its hidden functionality is found in a file named index.android.bundle within the resources directory of the app. This file mostly contains benign React Native modules which are commonly found in legitimate apps and provide the core capabilities of a React Native app. However, one of the modules stored here contains heavily obfuscated code. Analysis shows that this module handles C2 communication, which is achieved through the use of the messaging capability of Firebase, a widely used mobile app platform.

The use of Firebase push-messaging as a C2 is of particular note because - as information about the device is uploaded to Firebase on installation, even for legitimate use cases - it gives the attacker a way to understand their install base (and potentially exclude certain hosts from downloading subsequent payloads) without writing bespoke code to exfiltrate information from the infected device. A push-messaging setup also means that the app doesn’t need to frequently poll the C2 to check for updates, another standard sign of malware.

Besides establishing the C2 channel with Firebase, the most notable feature of this obfuscated module is the presence of multiple eval JavaScript statements. These statements—artifacts of dynamic code execution--are responsible for loading further malicious modules pushed to the device and executing them as part of the React Native app.

The ad fraud capability is activated via a push message from Firebase that contains a further React Native module—named RNVlCore—which is obfuscated similarly to the previous one and appears to do two things:

Notable in the RNVlCore module sent by Firebase is the occurrence of a package name, starting with com.viking that features consistently in all of the modules downloaded thereafter, indicating a solid link between the threat actor controlling Firebase and the developer of the subsequent modules downloaded from elsewhere.

After the initial setup mentioned above, the main module focused on performing ad fraud loads, which we call the Looper module. It consists of a main entry-point, starting a series of concurrent loops which are responsible for requesting tasks from their specific C2 endpoint and executing the tasks that are returned (visually represented in the Chart 1 Flow Chart). The table below shows the functionality of each task type as well as any conditions that are applied before initiating them:

Each task type has a set of modules on which it depends, and is responsible for checking that those dependencies are satisfied before running. For instance, the Banner task, responsible for the majority of the fraud, is dependent on the WebViewManager module, a module that provides functions for manipulating and controlling a series of customized webviews loaded on the device.

Modules that support the various task types above are downloaded as self-contained APK binaries and loaded by the “RNVlCore” base module. 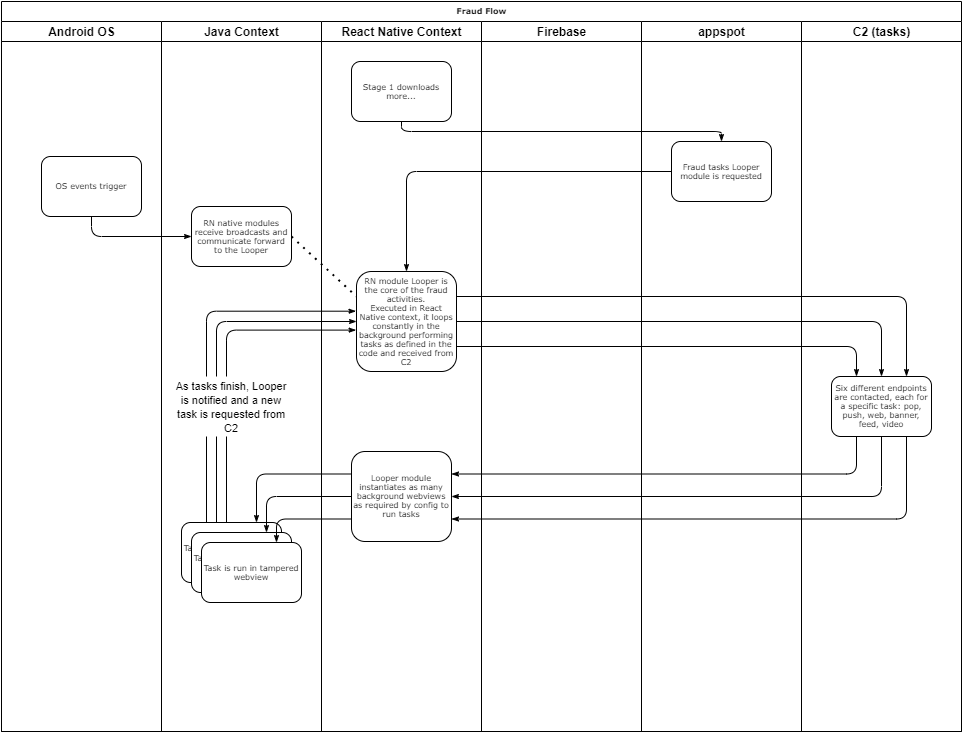 In addition to these specific modules, the Satori team observed the download of two executables as part of TERRACOTTA’s activation. These are downloaded in .so native library format and are SOCKS proxies. Our team didn’t observe ad fraud activity specifically from these proxies, though ad fraud activity often uses proxies. Our assessment is these proxies are registering the infected device as part of a residential / mobile proxy network which is a common monetization mechanism for developers with mobile installs.

Of all the modules downloaded as part of TERRACOTTA, the package with the most complete functionality is the Webview manager module, which we examine in detail in this section.

Like the other modules, the webview manager is downloaded as a React Native module, a full APK, as shown below.

Figure 4. Screenshot of the decompiled source code of the webview manager module. As with all of the modules downloaded by TERRACOTTA, it takes the form of an APK and code is located under the package com.viking.
Source: White Ops Satori Threat Intelligence and Research

In addition to the Webview manager module, a customized chromium APK is independently downloaded (from an independent server), unpacked and loaded for the Webview Manager module to use. This level of modularity is another indicator that multiple threat actors are probably involved in its development, and the level of customisation present in the webview binary itself showcases the sophistication of the operation.

The Webview Manager module manages a collection of webviews, which are spawned from the chromium APK. The manager will set spoofed values in those webview instances using the custom logic in the Chromium webview binary.

In order to replace the default webview on the user’s device, the Webview management module overrides internal Android API restrictions by using a hack known as meta-reflection. The module will also enable unencrypted HTTP traffic using the setCleartextTrafficPermitted method in the network security policy class.

The webview management module exposes many functions, which can be broadly categorized as follows:

Figure 5. Javascript executed in the webview including the prefix for native code to receive and act. Function wrapping the close command.
Source: White Ops Satori Threat Intelligence and Research 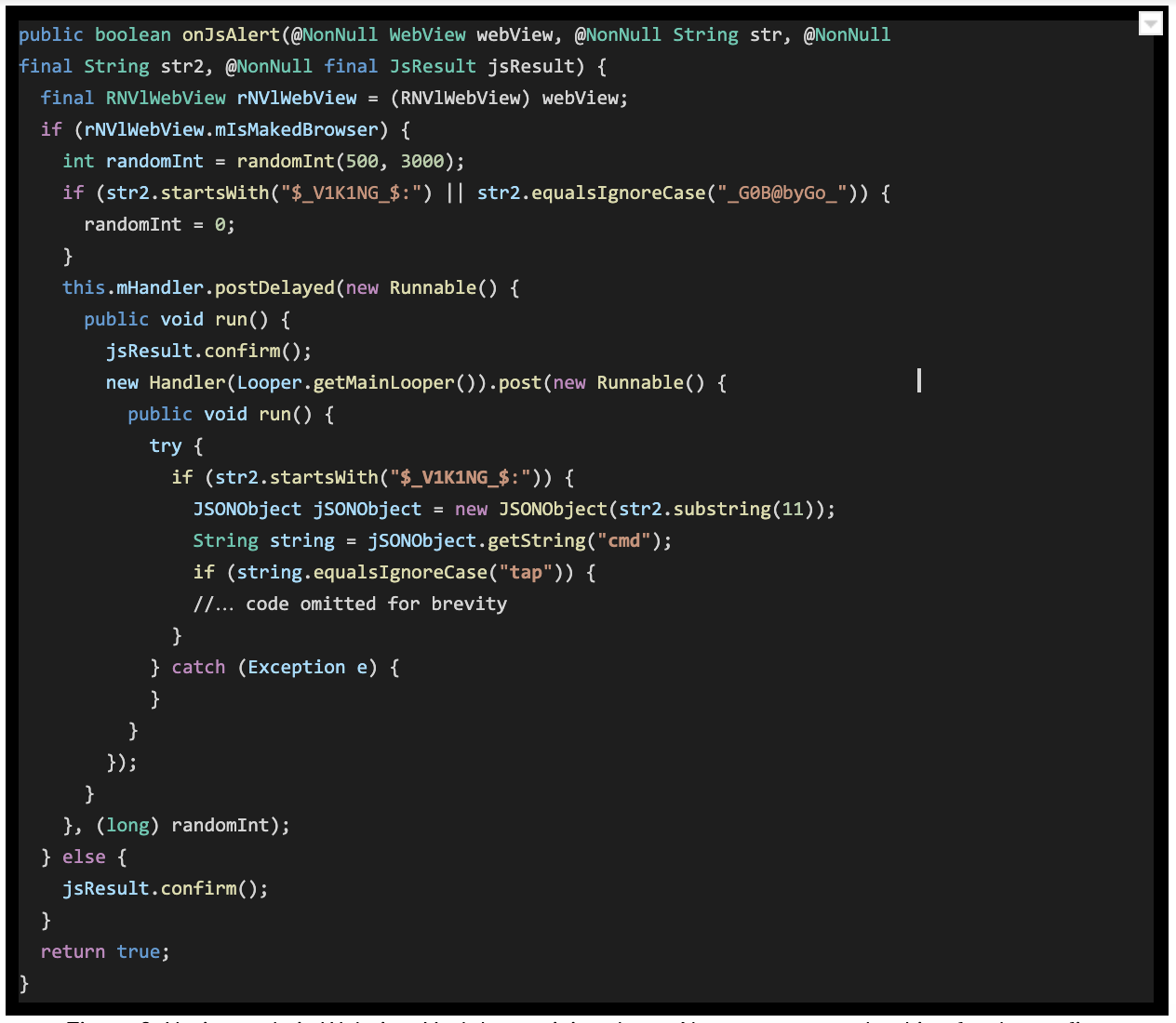 A domain was observed through the network traffic of the infected devices with behaviors that suggested it was the C2/task server for TERRACOTTA’s ad fraud module including hosting the customized Webview and requesting the /banner endpoint.

In addition to using parameters specified directly by the C2, the Webview management module selects certain parameters for the fake traffic it creates. For instance the HTTP User-Agent is generated from a template, with one of a set of specified Chrome versions selected at random and inserted into the user-agent for each ad request. 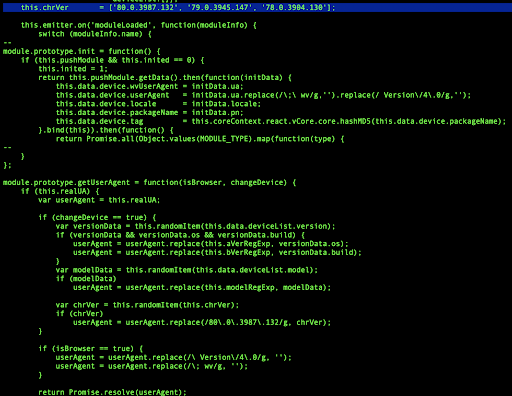 Figure 7. Screenshot of the source code from the malware payload responsible for launching the webview with a specific configuration. Note the logic in this snippet that modifies the user agent string.
Source: White Ops Satori Threat Intelligence and Research

The randomization of the Chrome version supplied in the user agent is likely done with the intention of device magnification, that is, an attempt to make a single infected device look like many different devices. However, in aggregate this randomization becomes easily identifiable and can be used as an identifying characteristic (as shown in the next section).

The scale and global impact of TERRACOTTA was impressive. In a single week in June 2020, the malware’s ad fraud operation was responsible for more than 2 billion fraudulent bid requests, had upwards of 65,000 unwitting participating devices and spoofed more than 5,000 apps.

The original lead that led the Satori team to the identification of the TERRACOTTA campaign was a highly uniform browser distribution and the presence of outdated Chrome mobile sessions.

One of the initial challenges in isolating TERRACOTTA traffic was that White Ops assessed early on that many of the values in the suspected TERRACOTTA traffic were “spoofed,” meaning threat actors supplied false values for several fields. Although the scale and sophistication were considerable, the spoofed values appeared intentionally placed. Accepting this, White Ops surmised that somewhere in the threat actor’s technical stack (malware binary or in the configuration of the malware), could be a presence of hardcoded values required for spoofing the fields.

A big portion of the TERRACOTTA traffic possessed a single value in the “Referrer” field of the HTTP GET headers to attribute the traffic to loopme[.]com. (We do not believe that LoopMe is involved in this scheme. However the threat actors' intentions behind using the loopme referrer domain are not clear at this time.) This spoofed referrer was not consistent with the app ID values provided in the session, even though the app ID values were also being spoofed. Armed with this knowledge, the Satori team identified both the traffic and malware binaries for the TERRACOTTA attack.

Use of residential and cellular IP space in the United States

The traffic White Ops Satori identified as TERRACOTTA originated almost exclusively from residential and cellular IP addresses. This observation supported the White Ops theory that mobile phone users were the victims of the botnet, contributing to the attack likely without their knowledge. While we observed TERRACOTTA traffic originating from several countries, the majority of traffic originated from IP addresses in the United States (US).

All of the TERRACOTTA apps, which have been removed from the Google Play Store, are based on React Native (RN). Indicators can be identified to discriminate RN apps using Firebase, adding more specific indicators to this threat in particular:

Appendix A: All Identified Terracotta Apps 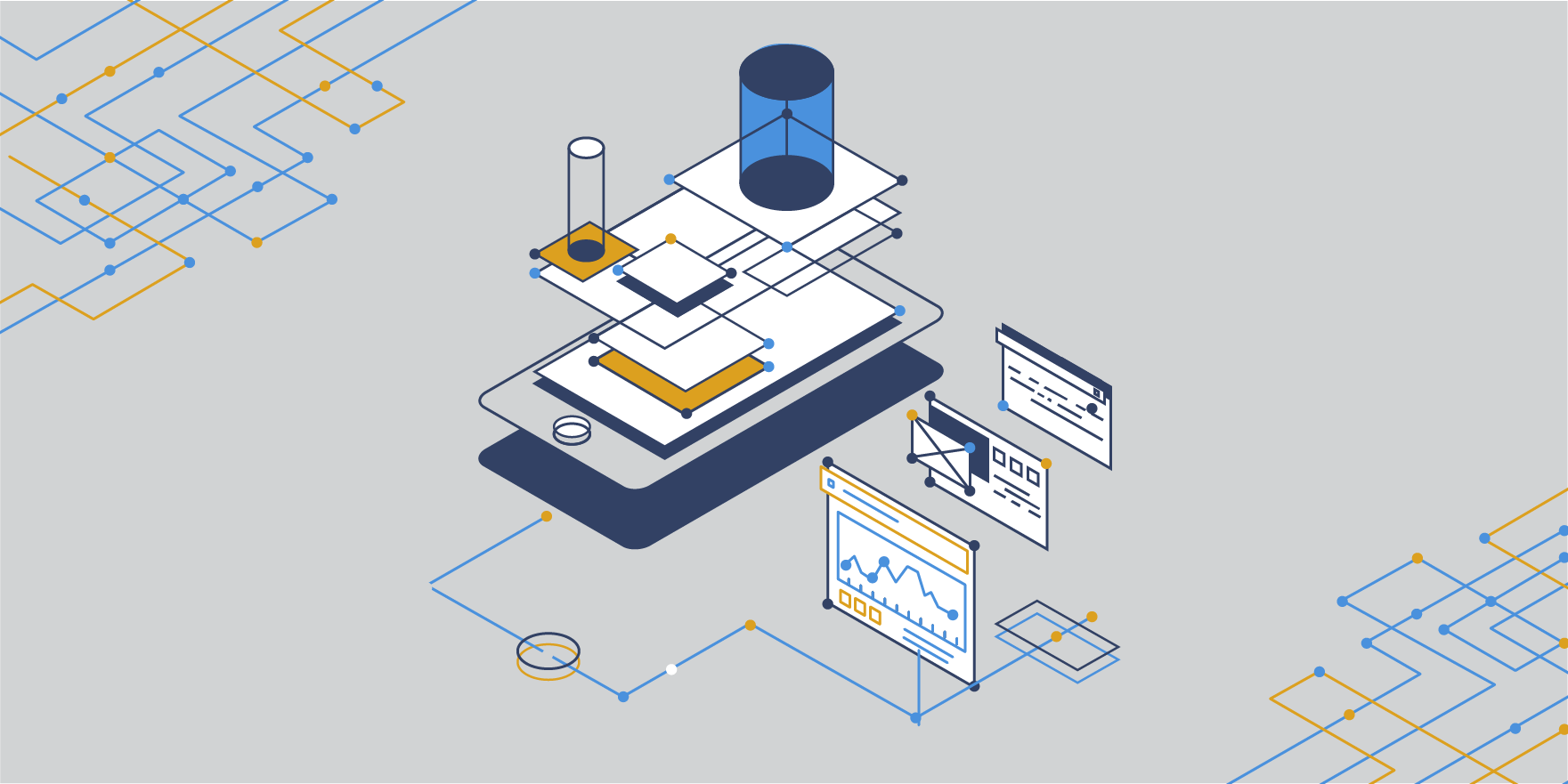 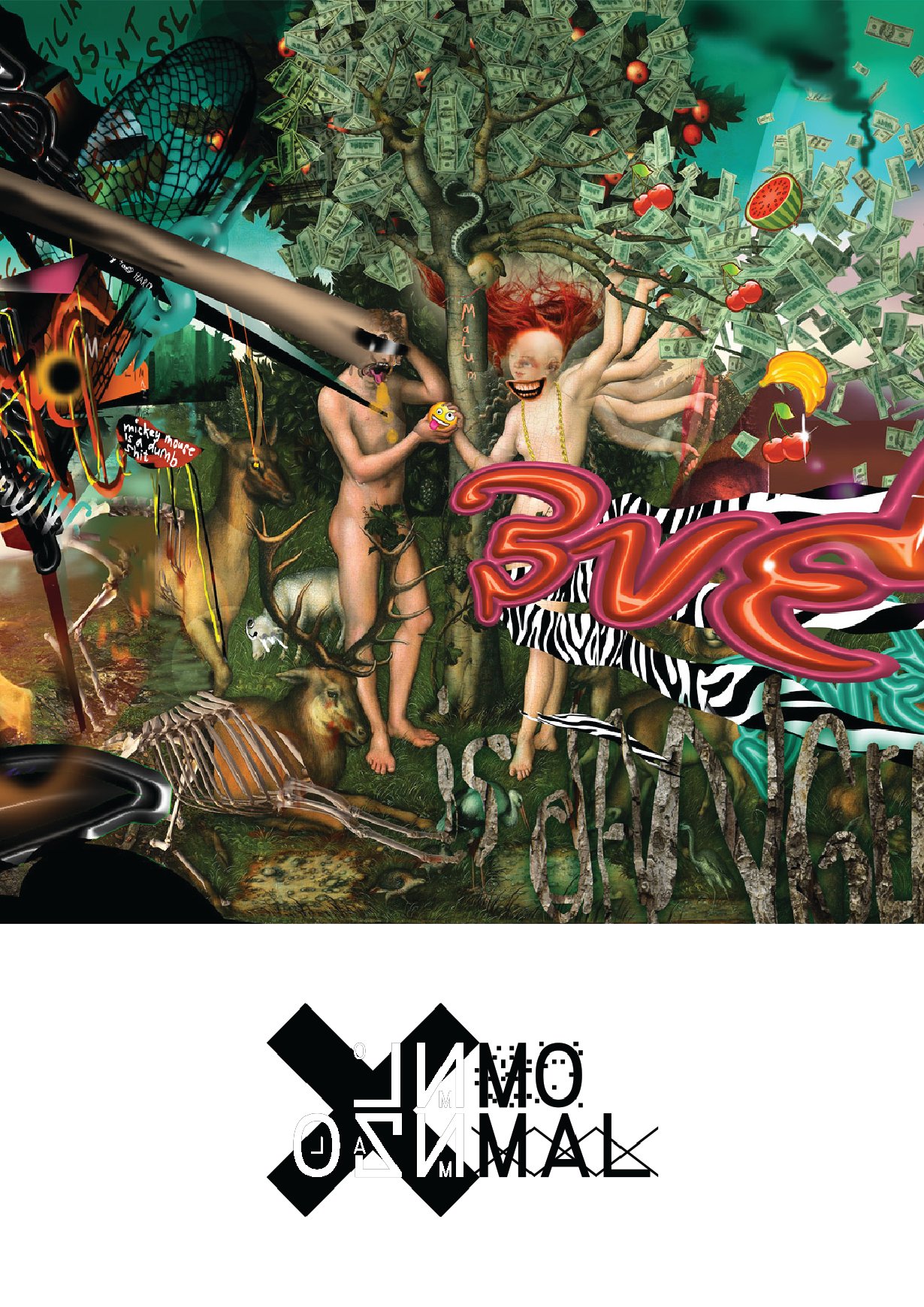