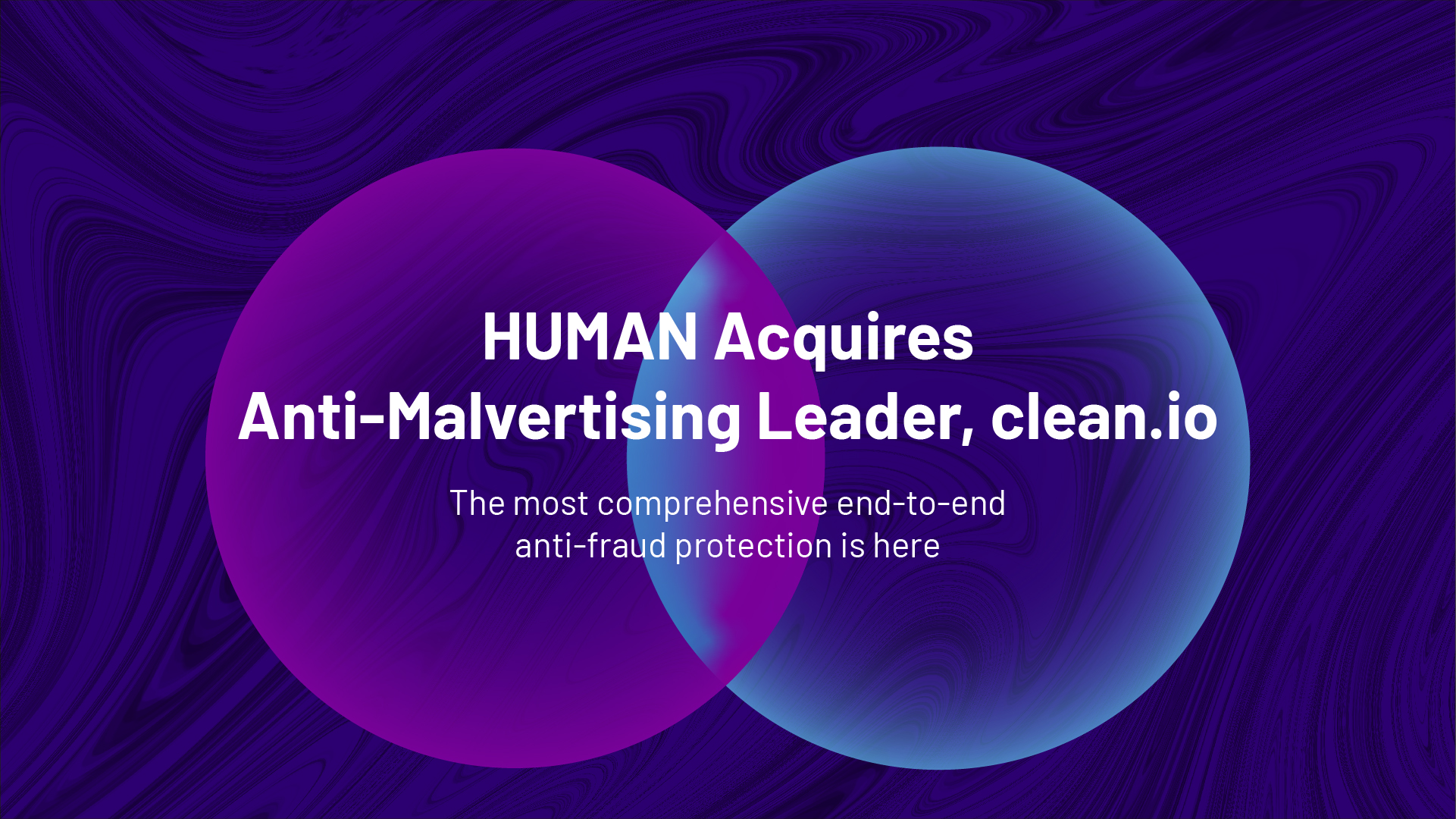 NEW YORK and BALTIMORE - (November 3, 2022) - HUMAN Security, Inc. (formerly White Ops) — the global leader in safeguarding enterprises from digital attacks with modern defense — today announced the acquisition of clean.io, the industry leader in protection against malvertising and e-commerce fraud. By adding clean.io’s products to the Human Defense Platform, HUMAN is furthering its vision to safeguard the advertising ecosystem from a full range of fraud and abuse by disrupting the economics of cybercrime and ensuring the industry’s $500 billion annual ad spend reaches real humans rather than funding criminal schemes. The acquisition is the third strategic market move HUMAN has made this year, beginning with the announcement of a $100 million growth funding round led by WestCap and NightDragon followed by the merger with PerimeterX, which included a $100 million debt facility from Blackstone Credit. Terms of the acquisition were not disclosed.

When the programmatic advertising ecosystem is used by cybercriminals to deliver malware to end-users via ads, it is known as malvertising. While malvertising increases the risk of compromise by exposing users to malware, it also reflects poorly on the brands and platforms delivering the ads, creating a significant brand reputation problem. By joining forces, HUMAN and clean.io have unlocked real-time anti-malvertising to stop fraud at the source, an offering that doesn’t exist in the market today.

“The vision of the Human Defense Platform is to safeguard organizations from a full range of fraud and abuse by disrupting the economics of cybercrime. As we saw with 3ve, delivering malware via programmatic advertising is one of the most prolific ways to create a large-scale botnet, and it is one of the earliest steps in the attack cycle,” said HUMAN Co-founder and CEO Tamer Hassan. “By teaming up with clean.io, HUMAN is gaining significant talent with deep domain expertise along with increased signal across the internet, enhancing our collective protection capabilities for our customers across the entire digital ecosystem.”

clean.io employs real-time behavioral protections on page, as opposed to static creative reviews and pre-scanning techniques offline. This methodology allows for the detection and blocking of novel threats, and is all done via a simple and maintenance free integration. clean.io powers protection for more than 125 billion impressions monthly across millions of websites and mobile applications globally. Combined with HUMAN’s programmatic footprint and visibility of more than 20 trillion digital interactions per week and the two companies’ superior detection and threat intelligence capabilities, the addition of clean.io’s technology to the HUMAN Defense Platform will make malvertising incredibly costly for bad actors and enhance protection across the media ecosystem.

Industry leaders also applauded the move. “HUMAN and clean.io have long been strategic partners to help combat two of the most important problems we face in programmatic advertising: malvertising and fraud. This type of consolidation in the ecosystem is welcome news and brings with it a true and holistic, 360-degree approach to fighting cybercrime.” said Ron Lissack, SVP, Chief Architect | Tech Leadership at Xandr. Sr. Director of Product Management at Xandr Sanmati Ananthamurthy also added, “The combined threat lens and mitigation that both HUMAN and clean.io provide, alongside our proprietary tools and processes, only further solidifies where the industry needs to be advancing towards.”

“There has never been a stronger need for collective protection against cybercriminals. Since our founding in 2017, clean.io’s mission has been to put an end to malicious code and to protect the customer experience, revenue and brand from the latest threats,” said clean.io Co-founder and CEO Geoff Stupay, who will serve as Vice President of Media Strategy for HUMAN. “To that end, we are thrilled to be joining forces with HUMAN. Our combined lens, telemetry and mitigation across the ecosystem will deliver the most effective and comprehensive protection for our combined customers.”

HUMAN leverages modern defense to disrupt the economics of cybercrime by increasing the cost to cybercriminals while simultaneously reducing the cost of collective defense. Examples include taking down Scylla — an attack targeting a number of advertising SDKs within apps available via both Google’s Play Store and Apple’s App Store. HUMAN disrupted the PARETO operation — the most sophisticated CTV botnet ever found — in cooperation with Roku and Google. 3ve was brought down together with the FBI, Google, Facebook and many others in the industry. The takedown of Methbot recently culminated in the sentencing of the self-proclaimed ‘King of Fraud’ to 10 years in prison.

“With the clean.io acquisition, the Satori team will gain invaluable talent and threat intelligence. This will help us defend our customers from future attacks and support disruption efforts like 3ve, Methbot, PARETO, and most recently, Scylla,” said HUMAN Vice President of Satori Threat Intelligence and Research Gavin Reid. “We’re looking forward to expanding our investigative power and strengthening our takedown mechanisms to continue safeguarding all of our clients and the industry as a whole.”

As a cybersecurity company looking to achieve end-to-end protection across the supply chain, HUMAN is making strategic acquisitions to provide enhanced protection against automated threats for customers. The acquisition of clean.io, its anti-malvertising capabilities, client-side JavaScript behavioral analysis and mitigation expands HUMAN’s existing protections for publishers, platforms and brands. The acquisition also accelerates HUMAN’s leadership position, offering the most comprehensive protection earlier in the attack cycle against all forms of digital attacks including bots, fraud, account abuse and now, malvertising.

To learn more about HUMAN’s acquisition of clean.io, see the joint blog from Tamer Hassan, HUMAN’s CEO and Co-founder and Geoff Stupay, CEO and Co-Founder of clean.io.

About HUMAN
HUMAN is a cybersecurity company that safeguards 1,000+ brands from digital attacks including bots, fraud and account abuse. We leverage modern defense—to disrupt the economics of cybercrime by increasing the cost to cybercriminals while simultaneously reducing the cost of collective defense. Today we verify the humanity of more than 20 trillion digital interactions per week across advertising, marketing, e-commerce, government, education and enterprise security, putting us in a position to win against cybercriminals. Protect your digital business with HUMAN. To Know Who’s Real, visit www.humansecurity.com.

About clean.io
Founded in 2017, clean.io is a digital engagement security platform that provides businesses with the tools they need to protect their user experiences and brands by controlling the third-party code that executes on their websites. From helping some of the world's largest online publishers to prevent malvertising, to giving e-commerce merchants the ability to block the injection of unwanted discount codes at checkout, clean.io's mission is to ensure that brands truly own and control their most valuable digital assets - their websites. Visit clean.io at www.clean.io.